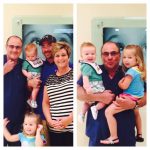 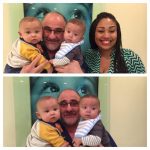 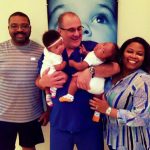 Brian and Rebecca were all smiles with their sweeties Raquel Bree & Bryce Ryan (5 months). 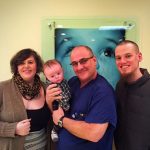 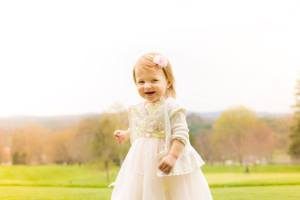 My name is Matthew Smith. My wife Judi and I started an emotional journey to try to have a baby almost 4 years ago. We new that we were starting a little late as my wife was 37 at the time. In a very short time frame we new we needed help. We live in Minneapolis, MN and didn’t know much about fertility, or should I say infertility. We took a recommendation from a local acquaintance and began our journey.

On a side note I am an executive with a high level stress job. I am kind of a get things done guy, so not being able to make my wife pregnant was very challenging and emotionally draining. When you spend every day making decisions for others to get things done, and then have to realize that you can’t help the most important person in your life; it is painful. I would say that the stress related to this journey surpassed any other stressful events in my life.

We went to a doctor in minneapolis where we tried: fertility drugs, insemination (multiple times), with no success. Little did I know that the $1,000 per attempt really did not increase my odds of success all that much. So after 3 or 4 attempts (and then finding out that the odds were not that high), we moved to the next level.

IVF: What is it, where do we start, and of course how can I afford this? We looked on line and found the doctor with the highest success rates published and made an appointment. I scrapped and found a way to write a check for $20,000, with no guarantees. My wife was never so excited at the possibility. Here comes the first bomb. She had to have surgery to have fibroids removed and then would have to wait 2 to 3 months before we could try IVF. Fast forward and we are sticking needles in her every day and going tot he appointments. Our doctor alerted us that the number of follicles she had was low for this procedure and that they weren’t very big. We pressed on, scared and unsure of the future. On the day we were supposed to go do the fertilization the doctor called and said he was calling it off because he didn’t think it would be successful. Wham!

We were crushed, we wanted to press on, but the doctor didn’t. After that my wife actually go pregnant naturally only to have a miscarriage. Another slap!

At this point I was concerned for my wife’s mental and emotional stability. A very close friend of mine told me about a Doctor in St. Louis named Elan Simckes, and suggested I look into his approach. I remember I called the office and asked to speak to him. HE was unavailable but called me back 30 minutes later and spent an hour on the phone with me discussing his approach. He told me there is always a shot, stay positive and come meet him. Then he called my wife and talked to her for an hour, reassuring her of his perspective on things. So we went. We had all of our files sent to Elan and met him in St. Louis. The first thing he said to us was, “I am not sure why your previous doctor called it off?” You had 4 follicles that could have worked. He then proceeded to fill me in on how the statistics for successful IVF are reported. Needless to say, my interpretation of the first IVF attempt were that the Doctor was more concerned about his stats then our feelings, and desire to make a baby. I told Elan, that I wanted to push harder than ever and we would not quit as long as he thought we had a chance.

I wrote the check, I think it was 8,000 or something, all I know is that it wasn’t $20,000. We went through the steps. A couple things I noticed: I could call Elan on his cell any time and he would talk to me. Every appointment we had was with the Doctor, not a tech or a nurse, it was Elan. He made my wife feel at ease, (as much as you could). We got some fertilized eggs and they were pretty good grade. We implanted 3 and flew back to Minneapolis. Two weeks later we took a pregnancy test…….POSITIVE!!!!! We got on a plane and flew to St. Louis because we wanted Elan to do the ultrasound, we wanted him to celebrate this victory. Here comes the next punch in the face, chemical pregnancy. My wife was devastated.

Went flew home to Minneapolis and decided to talk to each other about options. We thought about donor eggs, adoption, and the idea of not having kids. We decided to take a break and accept the fact that we may never have a child. Low and behold, she got pregnant again, naturally. This time we had a tubal miscarriage that resulted in my wife have both fallopian tubes removed. Now we knew, we would never get pregnant without the help of a doctor. My wife is now 40, and we were thinking our time may have passed.

We rallied one more time and called Elan and said we were going at it again. We flew down to St. Louis and stayed there for 2 weeks. We started again and did the drugs, and the the appointments. Again not a lot of follicles, but Elan, was confident and Judi was relaxed because we knew it was out of our control. We got 5 fertilized eggs, but Elan didn’t like the lining. So we froze them all. 2 months later and 4 months before my wife’s 41st birthday, she flew down to St. Louis and the defrosted the embryos. Three made and we implanted them all. Two weeks later….PREGNANT! 4 weeks later… Still Pregnant! Nine months later we have a beautiful, perfect little girl named Matilyn Jane Smith.

We couldn’t have done it with Dr. Elan Simckes. He never gave up. HE didn’t care about his stats he cared about making us a baby. His personal touch is not an attribute that you find in most physicians. The work he is doing makes dreams come true.

Elan, we thank you from the bottom of our hearts for making our miracle happen.

My husband and I visited many so-called specialists in the field of reproductive endocrinology. We were told by all of them that the only way we could achieve pregnancy was through In Vitro Fertilization. We were never satisfied with their recommendations, because not one of these “specialists” could ever give us a definitive explanation for the cause of our infertility.

We finally found our way to Dr. Simckes, through the Internet of all things! We were extremely reluctant to visit him, since we didn’t know much about him, but it turned out to be the best decision we ever made. He truly listened to us, he saw our hearts and he worked diligently to help us conceive. His energy and optimism are contagious! Infertile couples need a cheerleader who truly believes in them and understands why they are on an emotional roller coaster. On our first visit he discovered the cause of our infertility, scheduled surgery for the following week and within a few months we were pregnant! Unfortunately, this pregnancy ended in miscarriage. But there was Dr. Simckes, holding our hands and in a quiet way, letting us know he cared and would continue to be there for us.

Dr. Simckes is very direct and honest. We have never left his office wondering what he thought. When the time came for us to surrender to IVF, we knew that was our only option and we knew we had a secret weapon along the way…Dr. Simckes as our personal cheerleader.

We were pregnant on our first IVF cycle and Dr. Simckes cared for us throughout the pregnancy. Yes, I say us, because couples are in this together. Dr. Simckes fully understands this and he made sure that my husband was always informed. Our daughter, Taylor, is the greatest blessing God has ever given us and we are so grateful for the help of Dr. Simckes. 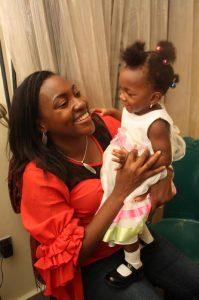 My husband and I lived in Lagos, Nigeria and had been trying for a baby for 6 years. We found Fertility Partnership on the internet in 2010 and contacted them to schedule a telephone consultation with Dr. Elan Simckes. We had a long but informative and highly encouraging consultation with him on phone and decided to travel to the United States for the treatment.

We were really happy to make this move and were certain that we would be getting the best fertility treatment experience with Fertility Partnership. Thankfully we were not disappointed. We found Dr. Simckes and his team to be very friendly, empathic, and yet highly professional. They made us feel really at home and what would have been a very stressful experience turned out to be quite peaceful and comforting. The ambience of the atmosphere at the facility was really soothing and we looked forward to our appointments with excitement.

We had IVF treatment at Fertility Partnership and to our utmost joy and by God’s grace, the treatment was successful. Our lovely daughter Michelle was conceived. She will be two years old in July and is a very bright, energetic and beautiful child. Our overall experience at Fertility Partnership was really great and we heartily recommend it to anyone one looking for a good experience in fertility treatment.